I can now tick Budapest off my must-see-while-in-Europe list! As true as that may be, there is so much more to this majestic city, than simply ticking it off however. It is a destination which deserves to be on everybody's list of places to visit.
I was blown away by how much there was to see and do, even when taking a stroll along the river. Its Prague-like layout, Rome-like greatness and Russia-like feel brought a mix of emotions for me and I felt like the luckiest girl to have Elliot there to experience this city with.
We arrived on Saturday night and left on Monday (today!), but the sun cracked up its rays enough to inspire and fuel me enough to return home and blog about it right away. Here's our Budapest in 1,5 days... 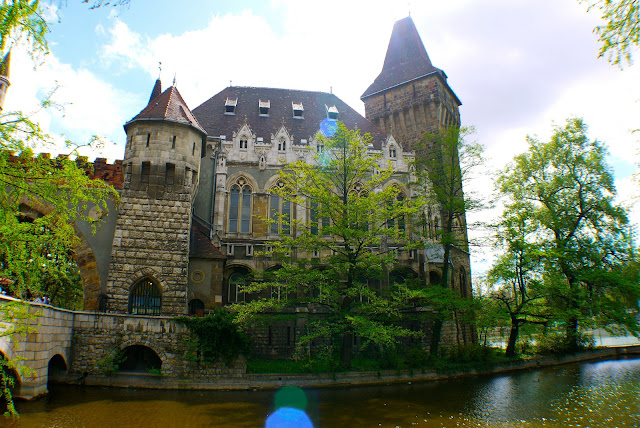 We felt like we arrived in Disneyland, when we got to the Vajdahunyad Castle. It had such a magical feeling to it. I bet it will be amazing in winter too, when the water freezers over for iceskating here. 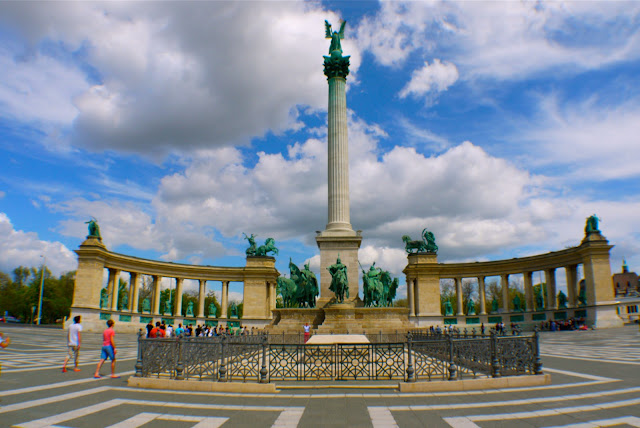 Heroes Square was quite a site to marvel at. It was outside the hall of arts and surrounded by art and gold museums. 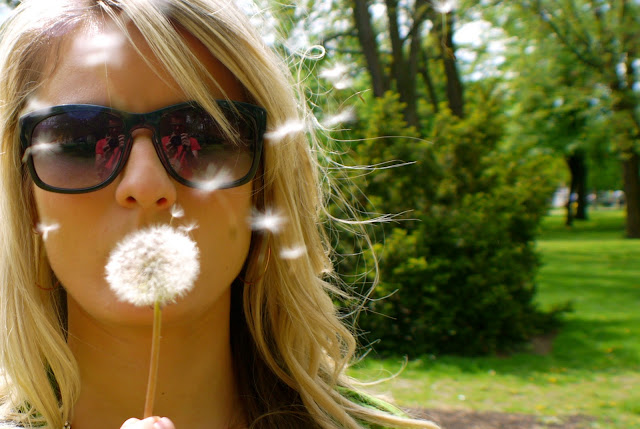 A bit of fun in the park next to the Time Wheel, which we somehow managed to miss. Maybe less fun next time. 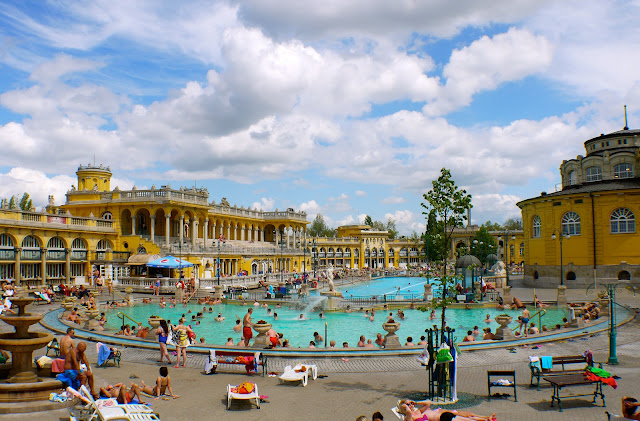 The Szechenyi Spa Baths! I've never seen anything like this- everyone takes advantage of the city's thermal system while soaking up the rays outdoors. 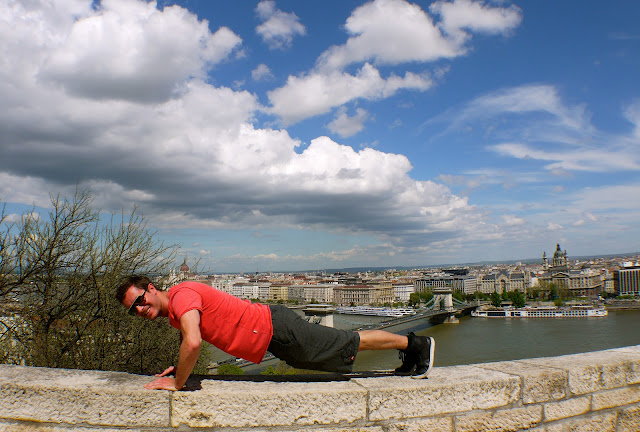 A travelling tradition- why not do a few push-ups? When in Budapest... 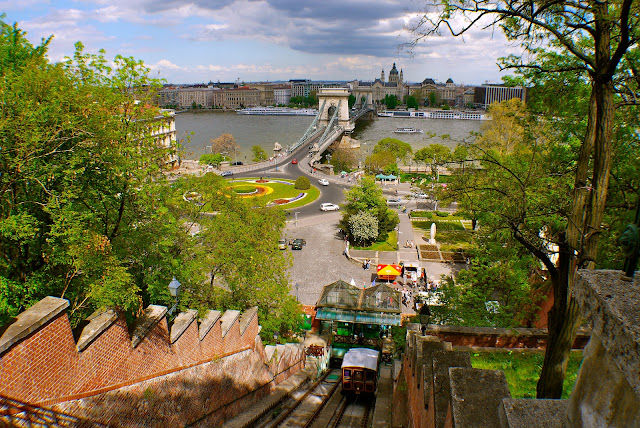 At the top of the National Gallery looking down at the Funicular (I just love it how this name has 'fun' at the front of it) and the Chain Bridge. 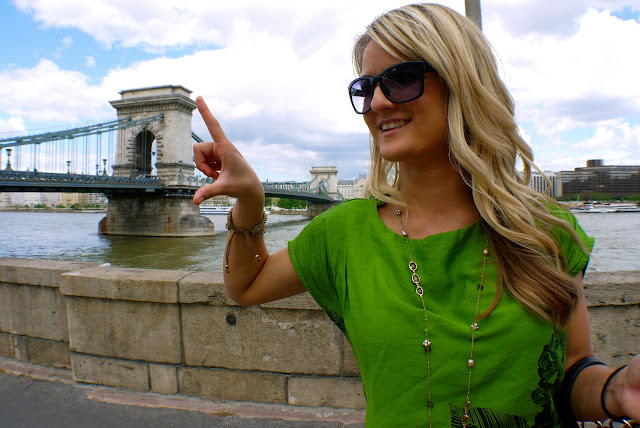 Here's a closer look at the legendary Chain Bridge. It's one of many bridges linking the Buda and the Pest sides of the city, but tends to be the most well known. 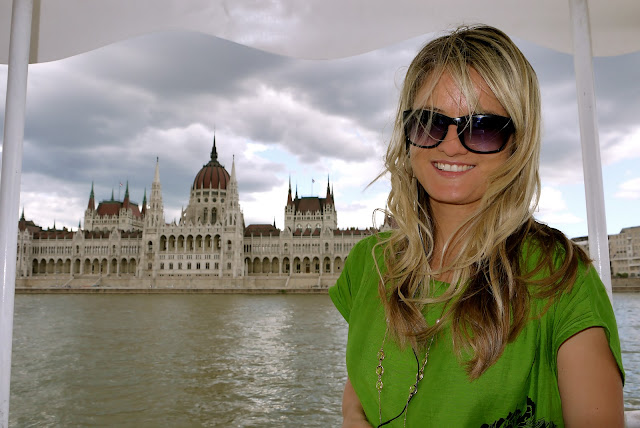 We took a boat tour along the Danube River and here is the Hungarian Parliament. It's 500 metres long and is apparently the 2nd largest parliament building in Europe. Impressive! But which is the largest? 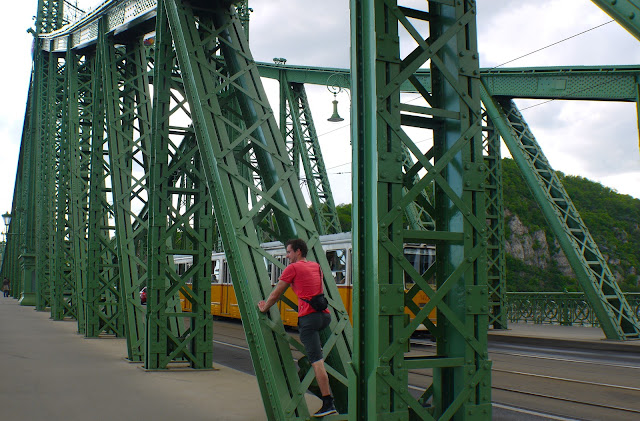 This bridge is called the Freedom Bridge. Elliot was certainly feeling free on it. 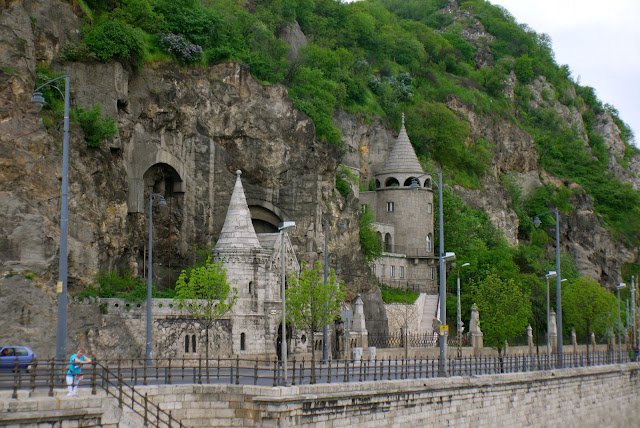 Just as I thought the city baths were the most fascinating thing I've seen, here is a Chapel in the Rock, which we decided to visit because it looked cool from outside. It was such an amazing experience! It also happened to be a Sunday, when a church service was on. Singing and praying right inside low ceiling caves with hundreds of people spread around various corners- it was a sight to remember. 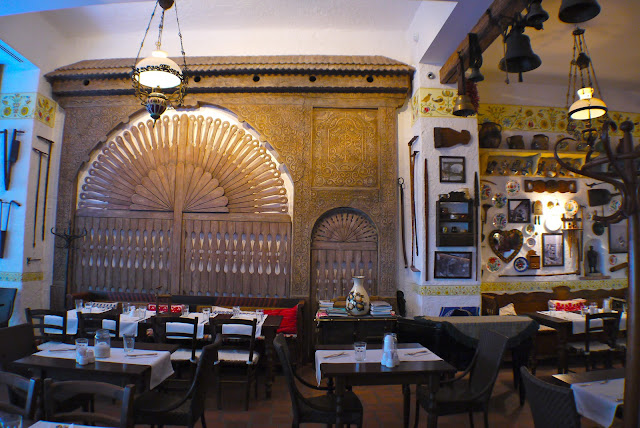 One of the awesome looking Hungarian restaurants on Vaci Street. The Great Market is at the end of the street and I wish we had more time to check it out. We initially ended up on the street because someone recommended that we visit 1000TEA, a little tea house, but it was also closed on Sunday. 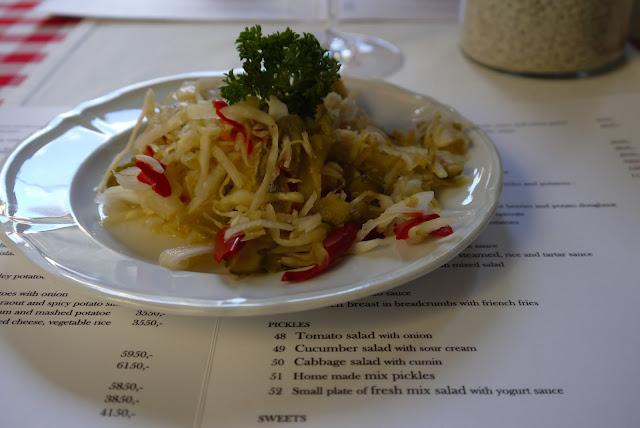 A very Hungarian dish- everyone seems to be into their pickles. So I joined them. Happily. 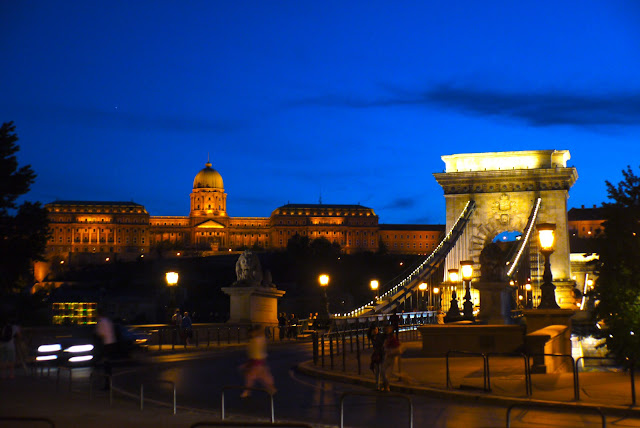 Chain Bridge and Royal Palace lit up at night. This city really knows how to look its best at all times of the day (and night). 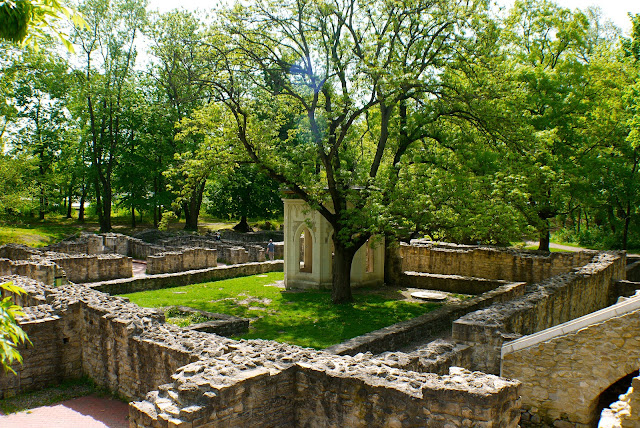 One of the ruins on Margaret Island. Wish we brought our running shoes- the entire island had a soft cushy rubber track along its circumference for runners. Everybody's needs considered. 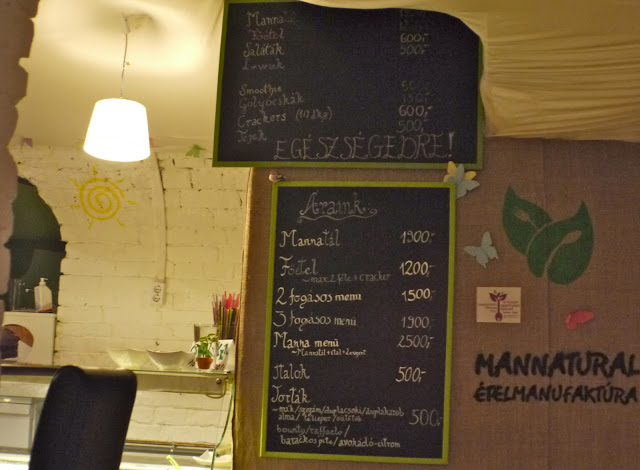 And the final stop during our flying visit definitely had to be Budapest's only raw food cafe! Mannatural is conveniently located right by the Parliament building. I marked it on the map even before I found our hotel. 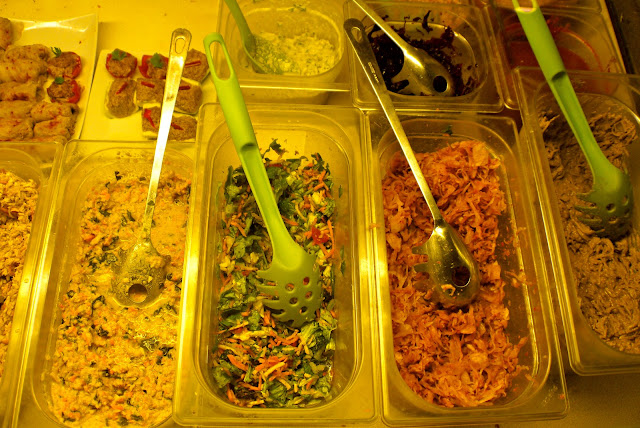 When we made our way down the steps, the first impression wasn't the fact that it was in a windowless cellar, but rather the funky whiff of cabbage, which is the smell you had no way of escaping. If you like cabbage, you'll be in heaven. There's cabbage of every kind- picked cabbage, creamy cabbage, red cabbage with beetroot, curried cabbage, coleslaw, spiced cabbage, mixed cabbage salad, cabbage and cabbage. As much as I do love my cabbage and sauerkraut, I also love Elliot, and Elliot was not enjoying the smell or the vibe. 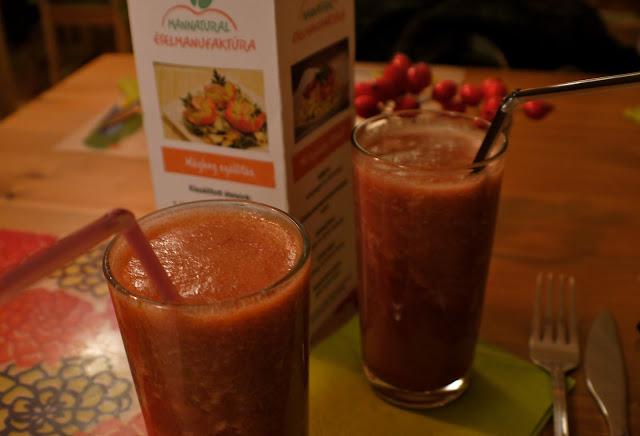 All the smoothies were pre-made and sitting in jugs ready for the Monday lunch rush. I was fascinated with the flavour combinations of blends such as beetroot and kiwifruit, also black sesame, poppy seed and dates, but went for the non-adventurous option of berry, apple and orange. I would've definitely gone for the poppy seed option if the milk was strained without all the bits. 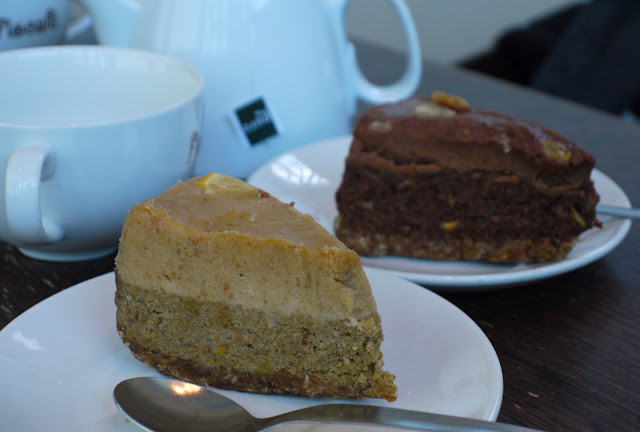 The cakes looked far too good to pass on and even though both Elliot and I weren't ready for them, we opted for the take-out option and unwrapped them at the airport to have with a cup of peppermint tea, prior to departure. The lovely girl at Mannatural recommended her favourite, which was a lemon cake, so I went for that, but for Elliot it was only ever going to be chocolate. I loved the fact that all the cakes were nut-free and they just used dates and coconut oil for the top with added flavour depending on the cake. The bottom was made of coconut, dates, fruit and physillium husks. The texture was gorgeous, but as much we both enjoyed the 'lemon' cake, it tasted nothing like lemon, rather toffee-like due to all the dates. The chocolate cake was unfortunately left very much untouched once we sampled a helping of what tasted like a 'healthy combo' of bananas and raisins mixed in cacao.
Hats off to Mannatural for taking the risk and leading the way on the raw food front in Budapest. It was amazing to see a queue of people waiting to be served lunch and I hope your efforts and talents continue to spread. Perhaps when we return next time, the raw food scene would've evolved and I'll be writing an entirely different review with a big shame-on-me cross all over this one. For now however, it is fair to say, that we were left... Hungry in Hungary.
7 comments