Anyone for a sports drink?
A guest post by Max Tuck, The Raw Food Scientist

1.  Inactive, does not participate in exercise: Drink water. And start exercising.

2 .  Participates in exercise of less than 20 minutes per day: Drink water. And do more exercise.

4.  Participates in high intensity exercise for 20 to 90 minutes: Drink water.

5.  Participates in high intensity exercise for over 90 minutes: Good for you! Wave to me at the next race won’t you? Drink water. If you feel that your performance level is dropping, drink one of The Raw Food Scientist’s special sports drinks*.

You will not find any of my special sports drinks in a shop. No, dear reader, you have to make them yourself. There are 3 different ones.

1.     Green juice. See my article on juicing for more information and the best ingredients>>

2.     Coconut water. Carrying a coconut is difficult of course if you are on a long run, bike ride or other discipline. Hint: Drink it before you start, or tip the contents into a bottle to take round with you. Here's a great video on how to open a young coconut>> Simple!

3.     A mixture of green juice and coconut water.

Easy isn’t it? You will recover faster, your body will be loaded with antioxidants, you will dilute out the lactic acid produced by the intense exercise and you will feel amazing. And the best thing is, people in all 5 of the above exercise categories can benefit from green juice and coconut water.
In summary, drinking sports drinks will not make you a better athlete. Drinking them if you are not an athlete will not miraculously turn you into an athlete. They will, if consumed regularly, shorten and degrade your life, whilst lining the already bulging coffers of companies that have been “sponsoring” the Olympics since 1928. In contrast, drinking The Raw Food Scientist’s suggested sports drinks will not support companies who profit from people’s ignorance. I have nothing to gain financially from you following my suggestions. But what I do gain is this: satisfaction in the knowledge that I have helped someone not only to improve their sports performance, but also their health at a cellular level, athlete or not. Are you ready? Get juiced!
*Not available commercially. 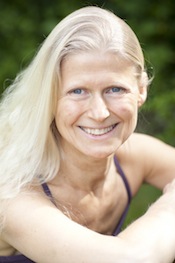 Max Tuck BVetMed, MRCVS, Hippocrates Health Educator
Max Tuck is a degree-level scientist with a passion for health and vitality. Written off as “incurable” by the medical profession in 1990, she devised and mapped out her own journey to wellness, achieving vibrant health just 6 months later. Since her recovery she has run marathons, competed in demanding endurance events, climbed mountains and gained a black belt in karate.
Through her lectures, consultations, books and CDs, Max teaches people how to skyrocket their energy levels and lay the foundations for attaining the health and well-being that they truly deserve. With clients ranging from British international athletes to grandparents, Max demonstrates that age is no barrier to success, and that with commitment and the right mindset, anything is possible.
For more information, and to access a complimentary copy of her e-book, “Vitality Now!”, please visit www.therawfoodscientist.com
1 comment