“There are three Royal Garden Parties held on the lawns of Buckingham Palace in London each year”…
“The Queen and other members of the Royal Family attend”… “Invitations are not transferable”….. ”Due to a limited number of invitations available, the Royal Garden Party may only be attended once” Now imagine my excitement when Elliot and I received this in the mail: 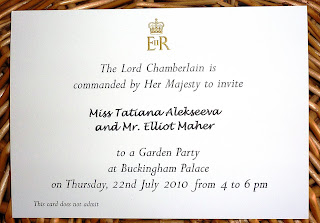 The Queen!! We are meeting the Queen! At! Her! House! The envelope our invite came in was so thick, it literally looked like a rectangular box. Not only was the invitation made of some heavy duty  cardboard, but two books of instructions, rules and dress code regulations were also enclosed. I read these very carefully. Throughout the print, “phones turned off, cameras prohibited” was mentioned exactly Five times. This could only mean one thing - there were to be some seriously good photo opportunities! If this really is my “may only be attended once” opportunity, it is almost worth losing an arm and a leg for, not to mention a camera. So Panasonic Lumix in the bag’s secret pocket and off to sip tea with Liz we go. We did start off on an apprehensive side, even a tad nervous taking photos outside the Palace, while queuing up. Then going through the Palace to the private gardens, all ideas I may have had about a career as a Spy went right out the window. No chance of getting away with anything there. In the garden, it was a totally different story. We began sneakily snapping away, until confidence grew so high that fun activities like press ups in front of the Palace started to emerge and even the Queen and the Duke popped up in our pictures! Overall it was a beautiful and memorable event. The Queen was the sweetest little host and her catering was worthy of its own Art Gallery. Not much Raw Food in sight, however I think I may have spotted a shaving of a cucumber poking out of the finger sandwiches and a strawberry under all the glaze. Nevertheless it all looked delightfully appetizing and perfectly minuscule. I too wanted some Raw Food sweeties, that are delightfully appetizing and perfectly minuscule, and since I have been getting some enquiries for recipes, this is one that has come up already four times during last week alone from different people via Twitter, Facebook and LinkedIn: I have never been a big fan of peanut butter myself and living in UK, we don’t even have Reese’s products to do a taste experiment. But I am pretty good at calculating a conversion of ‘not so good contents’ into healthy Raw Food ingredients and Google is pretty good at providing me with any product's ingredient list of these ‘not so good contents’. All I can say is: “Where? Where have you been all my life? Peanut Butter Cups, you have stolen my heart!” Now it’s your turn: (Makes 10 mini cups) For the cups 10 mini chocolate cases For the Chocolate 4 Tbsp Cacao Powder 2 Tbsp Cacao Butter, melted 2 Tbsp Coconut Butter/Oil, melted 2 Tbsp Agave Pinch Salt For the Peanut filling 2 Tbsp Raw Peanut Butter (make sure it is not ‘roasted’) 1 Tbsp Nutritional Yeast 1 tsp Agave -To melt my butters, I put them in a dehydrator for an hour on 105F, that way I know they will not reach the temperatures when they are no longer Raw and deprived of enzymes. You can do this in a double boiler too. -Add the rest of the chocolate ingredients and stir in well. 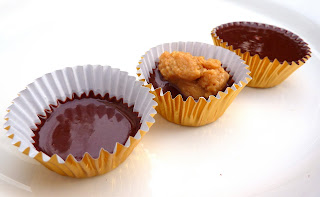 Love this recipe? How about another 21 equally insane healthy indulgences? If you haven't yet got your hands on 'Seduced- Raw Chocolate recipes to get very excited for', you are missing out big time! Mmmmm.
14 comments